Fynbos, fires and the future 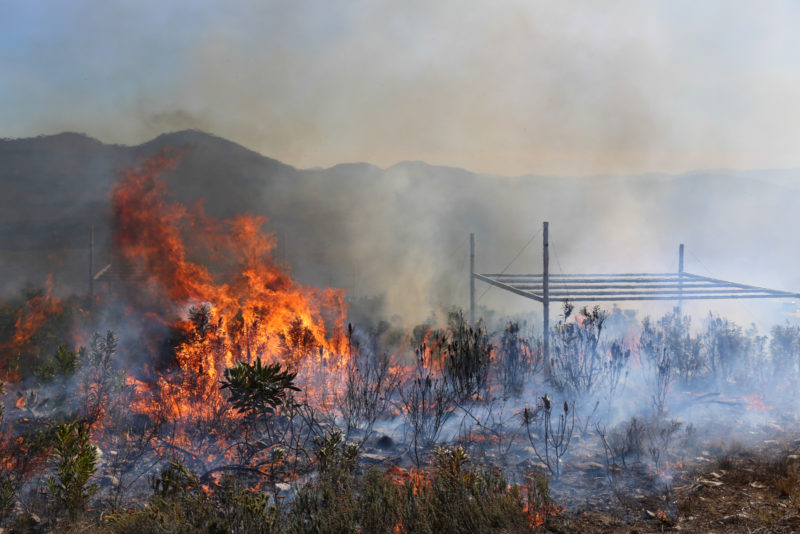 While fynbos needs fire to regenerate, overly frequent fires and the invasion of its natural habitat by alien plants are putting pressure on many threatened groups of fynbos plants. Photo by Adam West and Justin van Blerk.

Can a change in rainfall seasonality enable certain grasses to become more dominant in fynbos? And if so, what does this mean for the future of fynbos and fires?

These are among the questions Dr Vernon Visser, a senior research fellow of the African Climate Development Initiative (ACDI) at the University of Cape Town (UCT), is seeking to answer in respect of the Greater Cape Floristic Region, recognised as a global diversity hotspot.

Based at the inter-departmental Centre for Statistics in Ecology, the Environment and Conservation (SEEC) at UCT, Visser is part of a team that is investigating how climate change affects biodiversity, ecosystems and water in this floristic region. The region is under severe pressure from climate change, the spread of invasive alien species, habitat fragmentation and overly frequent fires.

Could the unchecked spread of certain summer grasses add even more pressure?

Visser’s research is focused on how C4, or “warm season” grasses, such as red grass, are expanding their range in the fynbos region, and whether this encroachment is being fuelled by climate change. He is using what he terms “the latest and greatest statistical techniques available”, as well as remote sensing (by means of satellite imagery).

Anecdotal evidence suggests C4 grasses, typically found in the eastern parts of South Africa, are expanding into the fynbos biome.

“This spread, often visible along the roadside and in disturbed veld, could be as a result of warmer winters and changes in rainfall seasonality in the winter rainfall region,” Visser explained.

“The encroachment of C4 grasses into fynbos areas — outside their normal climate and distribution envelope — could be an indicator of change, signalling that a significant [ecological] shift is under way.”

These grasses are already commonly found in areas with more summer rainfall.

C3, or “cool season” grasses, such as common veld grass, are the types typically found in the fynbos biome.

“The encroachment of C4 grasses into fynbos areas — outside their normal climate and distribution envelope — could be an indicator of change, signalling that a significant [ecological] shift is under way,” Visser said.

A large increase in the abundance of C4 grasses could also have major implications for fynbos fires, he warned.

“C4 grasses – adapted to grow fast and burn regularly – might fuel more fires in the region. These [summer] grasses may also benefit from human disturbance of natural veld.”

While fynbos needs fire to regenerate, overly frequent fires and the invasion of its natural habitat by alien plants are putting pressure on many threatened groups of fynbos plants. The added encroachment of plant communities from outside the winter rainfall region, including summer grasses, could significantly increase this burden on the ecosystem processes in the fynbos biome. 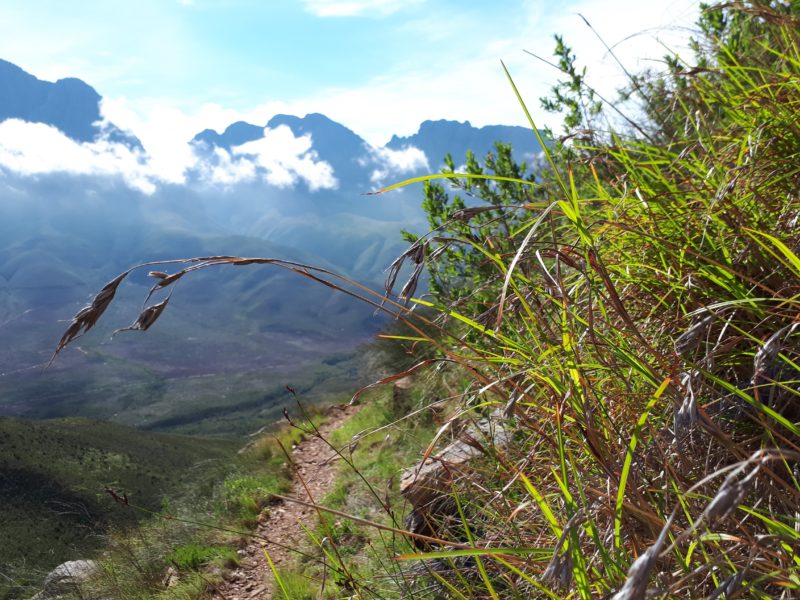 Climate change poses a fundamental threat to the places, species and processes that people rely on for their livelihoods, and the big question now is how potential seasonal shifts will affect the Greater Cape Floristic region specifically. Photo by Vernon Visser.

Compared to cool season grasses, warm season grasses might have an “evolutionary edge” that enables them to flourish under drier conditions. The latter are generally more drought-tolerant as they use water more efficiently.

Until now, very little research has been conducted on the seasonality changes occurring outside the global north. Studies on this topic are multidisciplinary and involve ecologists, statisticians, environmental scientists and hydrologists.

Visser’s work is being done under the auspices of the National Research Foundation-funded Applied Centre for Climate and Earth Systems Science (ACCESS) programme, a national research consortium in which UCT participates. The ACDI acts as a conduit for ACCESS funding to reach a wide range of academics within UCT.

His project examines how changing seasonality is affecting biodiversity and ecosystem services in the Greater Cape Floristic Region, including water purification and pollination. These services are defined as the benefits that humans obtain from nature.

Visser’s work aligns with current ACCESS-related field experiments by Professor Adam West and his team from the Department of Biological Sciences at UCT. Their main study site is in a private nature reserve in the Klein Karoo. Here, they have erected rows of small rainfall shelters – square metal frames on four posts, covered with plastic corrugated roofing – to study seasonality changes and the effects on plant communities.

“We tend to think that the entire region is going to be severely affected by climate change, but not all fynbos species are responding [to seasonality changes] in the same way.”

The scientists are simulating drought conditions, exploring resultant changes in plant communities, and determining whether some species are favoured over others in hotter and drier conditions.

What is known is that climate change, particularly its seasonal changes, is likely to have more impact on the fynbos region than on biomes in the rest of the world. But the exact nature of that impact remains uncertain.

“We tend to think that the entire region is going to be severely affected by climate change, but not all fynbos species are responding [to seasonality changes] in the same way,” Visser said.

“During the recent drought, researchers in our team, for instance, noted localised drying of species on north-facing slopes in the study area. The challenge now is to translate this kind of nuanced information back into our climate models and conservation planning.”

As part of his research, Visser is examining long-term rainfall records and how they correlate with the spread of grasses in the fynbos region. This summer, his team will be planting grass seedlings in both sandy and clay soils in order to collect data regarding how these grasses grow under certain soil and moisture conditions. The information will be upscaled from plot to landscape level, and enriched with data from drones and satellite imagery, to better represent the entire fynbos region.

“This kind of research is important in that it informs climate adaptation responses. The data is also key to improving climate modelling and the impact of resultant models on policy and strategies in the region,” Visser said.

Climate change, he stressed, poses a fundamental threat to the places, species and processes that people rely on for their livelihoods. The question now is if it will affect seasonal shifts in the Greater Cape Floristic region specifically.

“Worst-case scenario is that we get a complete ecosystem shift: a change from a highly biodiverse system that burns every 10 or more years to a grassy system that is relatively species-poor and burns once every two years.

“A complete change in plant and animal communities will also affect ecosystem services like natural carbon sequestration and water provision. How exactly, we don’t yet know.”

*This article is part of a six-part series published by UCT online.